This morning, I appeared on Tom Ashbrook’s radio show, along with Paul Krugman and Stan Collender.  I wish there had been more time to explore Paul Krugman’s very important point that one sector’s deficit spending becomes another sector’s surplus.  This is a core point that we make all of the time on this blog.  Cutting the deficit cuts the non-government surplus dollar-for-dollar.  So any plan to cut $4 trillion in deficit spending is a plan to reduce the non-government surplus by $4 trillion.  The ordinary American will gleefully support deficit reduction (as polling shows), but I’m confident that you’d get a very different reaction if you asked them whether they support cutting their own surplus by trillions of dollars.  Almost no one recognizes that the former implies the latter.

The point I make all the time is this: as long as the country — any country — runs a current account deficit (which the US does), the government’s deficit will need to be at least as large as the current account deficit, or the private sector will be in deficit.  Bigger government deficits mean, ceteris paribus, bigger private sector surpluses.  And deficit reduction means a reduction in the private sector surplus as shown below.  It’s hard to make this point in a compelling way without the visuals, which is why it works better on C-SPAN than on NPR.  But Krugman brought it up, and it is a point that progressives should work hard to emphasize. 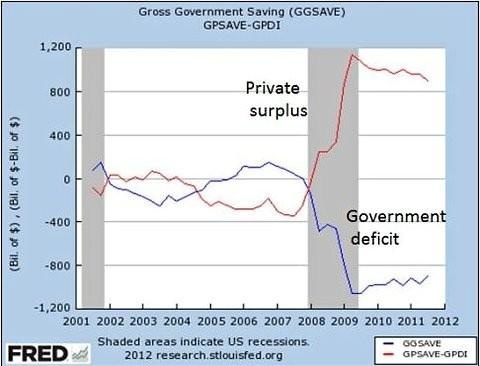 I also wanted to point out, but didn’t get a chance, that the deficit is currently falling at its fastest pace since the end of WWII.  So it’s a particularly odd time for lawmakers to be stirring up (and progressives  playing into) hysteria about our “budget problem.”  The so-called problem is taking care of itself (as it typically does when the denominator in the deficit/GDP equation is rising). 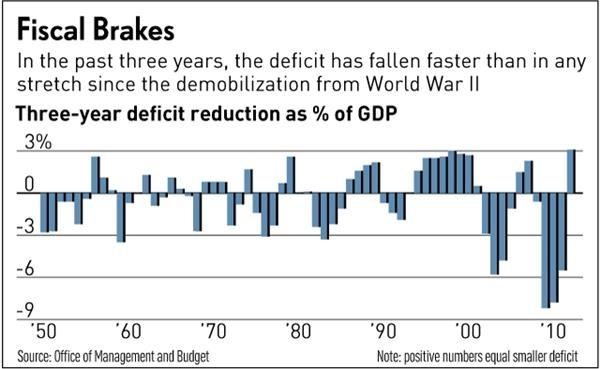 And so the problem remains trying to turn attention away from the phony deficit crisis back to the real jobs crisis that is still holding America back.

The podcast will be available later today and for the next two weeks on iTunes, and the audio stream will go up soon here.

This article originally appeared on New Economic Perspectives on December 4, 2012.